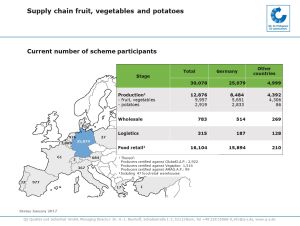 Between January 2016 and December 2016, more than 270 additional producers of fruit, vegetables and potatoes decided to participate at the QS scheme. 76 percent of the increase is attributable to international businesses (plus 201 companies). With 41 percent, the increase is highest for potatoes producers from abroad. In Spain, the Netherlands and Italy alone, the number of producers eligible to deliver goods into the QS scheme grew by 29 percent.

This positive trend is also confirmed by logistics service providers: Here, the number of scheme participants increased by 53 percent. Currently, 187 German and 128 logistic service providers from abroad are participating at the QS scheme.

At the wholesale, a decrease in the number of German scheme participants is recorded. Here the number decreased from 556 to 514 (minus 6 percent). However, the number of wholesalers in European neighboring countries increased by 6 percent to 269 businesses – especially in the Netherlands (plus 16 percent) and Poland (plus 175 percent).

30,078 companies from 21 different countries participate at the QS scheme in the supply chain fruit, vegetables and potatoes.

The current figures of scheme participants are calculated each quarter by QS Qualität und Sicherheit GmbH and are listed for you here. The overview showing which new companies currently participate in the QS scheme you can find here.