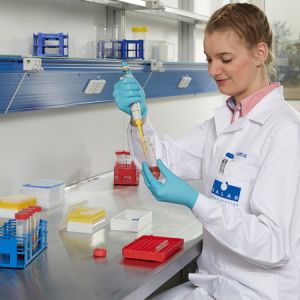 In spring 2019, QS put the analytical competence of QS-approved laboratories in Germany and abroad to the test for the 26th time. They were faced with the challenge of identifying eight active substances added to the onion test matrix, two of them using individual methods. Of a total of 65 participating QS-approved laboratories, eight failed in this task. The remaining 57 laboratories passed the test successfully, 31 of them with the maximum score. Furthermore, 25 laboratories took part in the spring test in the recognition procedure, of which only 14 laboratories passed the current test, and on a voluntary basis a third-party laboratory, whose participation was also successful.

Analytically, the onion is one of the most demanding matrices. The root vegetable contains sulphur compounds, which can lead to strong matrix effects. In the current laboratory performance assessment, the laboratories had the task of detecting eight active substances in the test matrix, whereby the active substances glyphosate and maleic acid hydrazide were to be determined using individual methods. The herbicide glyphosate as well as the germ inhibitor maleic acid hydrazide were part of the test design for the first time as well as the insecticide active substance fenpropathrin.

The fact that onions are classified as low-risk and therefore rarely tested in practice contributed to laboratories’ not entirely convincing performance. In 2018, for example, only 849 onion samples (equivalent to 5.7 % of all samples) were tested for pesticide residues in QS residue monitoring. Despite this, there is also a demand for flawless laboratory analysis.

The herbicide active substances aclonifen and phendimethalin, the fungicide folpet and maleic acid hydrazide were increasingly subject to quantification errors. The reason for the quantification errors that occurred with aclonifen and folpet could be both the low concentration and the short shelf life of the measuring standards in the solvent. The active substance pendimethalin was also low dosed in the sample material to be analyzed and was therefore difficult to determine with the LC-MS/MS measuring technique. The same applies to maleic acid hydrazide, which had to be determined by a single method. Here the assumption suggests itself that missing empirical values in the analysis of the germ inhibitor led to quantification errors in the laboratories concerned.

All laboratories that have failed the test will be asked for their opinion after the test and must indicate their improvement efforts. The results will be presented at the annual meeting of laboratory managers, which will take place in Berlin in February 2020, and possible sources of error will be discussed.