You are here: All News (Pool) QS in international exchange at PROGNOSFRUIT and ICoMST 2019

QS in international exchange at PROGNOSFRUIT and ICoMST 2019 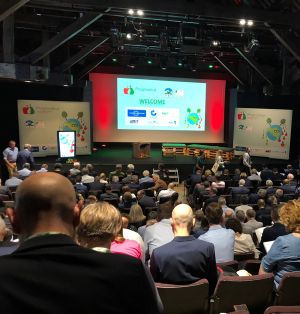 At the ICoMST 2019, which took place from August 4 to 9 in Potsdam, QS appeared for the first time as a sponsor with its own information stand. QS used the congress to present the services of the QS inspection system to a broad international audience and to exchange information on current projects with research representatives. The motto of the event was Meat for diversifying markets. The congress participants were offered a varied supporting programme with numerous lectures, workshops and panel discussions on current topics from the entire supply chain. Some of the main topics of the event were innovations, sustainability and digitisation. 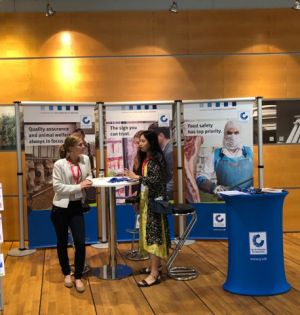 From 7 to 9 August 2019, the international pome fruit industry met in Alden Biesen, Belgium, for the 44th edition of PROGNOSFRUIT. QS also acted as sponsor and exchanged ideas with an international audience at the world's leading event for the apple and pear sector, which is organised annually by the Verbond van Belgische Tuinbouwcoöperaties (VBT).

This year's pome fruit forecast was eagerly awaited by the approximately 300 congress participants at PROGNOSFRUIT. According to the WAPA (World Apple and Pear Association), the European pome fruit industry expects significantly lower harvest volumes in 2019. It is estimated that due to climatic conditions and alternation, the EU apple harvest this season will be around 10.5 million tonnes and the pear harvest around 2 million tonnes.